Let’s face it. The playing that we do today is different than trumpet players did 25+ years ago. We are asked to play different styles on the same gig or rehearsal. We might play lead in a jazz band, play a church gig, play a wedding ceremony and the 4 hour long pounding reception, or even a Symphony concert with the first half being classical and the second, a strenuous pops half! You get the idea. All the while, the expectations of perfection have grown higher and higher.

With today’s recording techniques, people don’t listen to mistakes very much anymore. As a result, the average listener expects you to sound the same as all the recordings – flawless. People want you to sound like Phil Smith or Adolph Herseth one minute, and then the next, sound like Wayne Bergeron, Doc Severinsen, or Maynard Ferguson. After that, maybe a little Clifford Brown, Chet Baker, or even Nicholas Payton.

How could we ever live up to these unattainable expectations? Practice, listen, and play PATRICK MOUTHPIECES!

Many great commercial players play smaller mouthpieces for the demanding work that they do. Then, in order to sound appropriate for other work, they switch to a bigger mouthpiece for a darker sound. The drill sizes on our larger mouthpieces are not so big that they wear you out. We compensate those hole sizes with a back-bore to give you a very dark sound. Even when pushed, the mouthpieces retain their deep, resonant sound quality.

When it’s time to switch back, the commercial (smaller) mouthpieces have the resistance built in right where it counts.

The commercial side of our trumpet line is very different than anything currently on the market. The design cues date back to the golden age of trumpet where everybody had a big fat huge bright sound. It takes design cues from the early Jet-Tones, but with some fairly substantial differences. The rims are fairly wide and “cushy”. This makes a comfortable setup for the player, but also helps disperse the pressure over a larger area of the lips thereby increasing endurance. The mouthpieces have a V shaped cup, and have the perfect amount of resistance in the throat area to be able to play in the high range for hours. The back-bores are set up to accentuate the natural acoustics of a shallow mouthpiece with a trumpet – BIG, BRIGHT and FAT!!

The shape of these cups make it possible to play high easier for longer periods of time and not bottom out. The pitch center is more controlled than most shallow C cups as well.

These mouthpieces are easier to produce a fuller sound throughout the entire range of the trumpet (including the higher range) as the shallow C cup and with more pitch control for longer periods of time.

Steve Patrick has been on thousands of recordings including albums, film scores, and television, and has been a member of the Nashville String Machine for over 20 years.

Mr. Patrick can also be heard on publishing media such as Arrangers Publishing, Music theater international,  Disney theatrical, Row-Loff Productions, Music Minus One, and Hal Leonard to name a few.

Steve received his Bachelor of Music in Jazz Studies from Indiana University, where he was a student of David Baker, Dominic Spera, and Bill Adam.

A personal note.  As I look at the talent represented on this site, and the individual accomplishments, I am deeply humbled to be a part of such a community of musicians.  I feel a great deal of appreciation and gratitude towards Carl Gorodetzky, the Nashville String Machine, and the players that I have been fortunate enough to play next to for the last 20+ years.  (And continue to play with.)  I would not be the well rounded musician, or the person that I am today without their mentorship, artistic excellence, and professionalism. 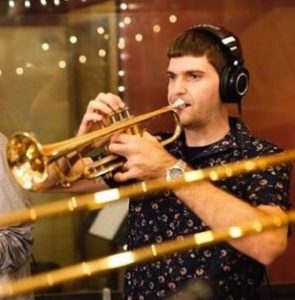 Chris Rymes has been working as a professional trumpet player and private instructor for over a decade. In 2017 he relocated to Nashville and began pursing a career as a studio musician.

Chris earned his Bachelor of Music from Berklee College of Music in 2012 and a Masters in Commercial Music at Belmont University in 2019 where he has since joined the faculty as a commercial trumpet instructor. While living in the greater Boston area, Chris worked for Trent Austin at Austin Custom Brass where he began assisting trumpet players with finding the mouthpieces, horns and equipment to fit their needs. After moving to Nashville, TN, Chris began working with Steve at PATRICK Mouthpieces in sales and customer service. He also performs precision valve alignments for PATRICK Mouthpieces customers.
​
Chris has performed with world-renowned musicians including Sheryl Crow, Blood Sweat & Tears, the Glenn Miller Orchestra, Maria Schneider, Bijon Watson, Peter Erskin, Lewis Nash, Steve Smith, John Fedchock, Clay Jenkins and Eguie Castrillo. He enjoys working in the studio, where he has recorded on several albums ranging in style from big band, jazz, fusion, pop, rock and mariachi.